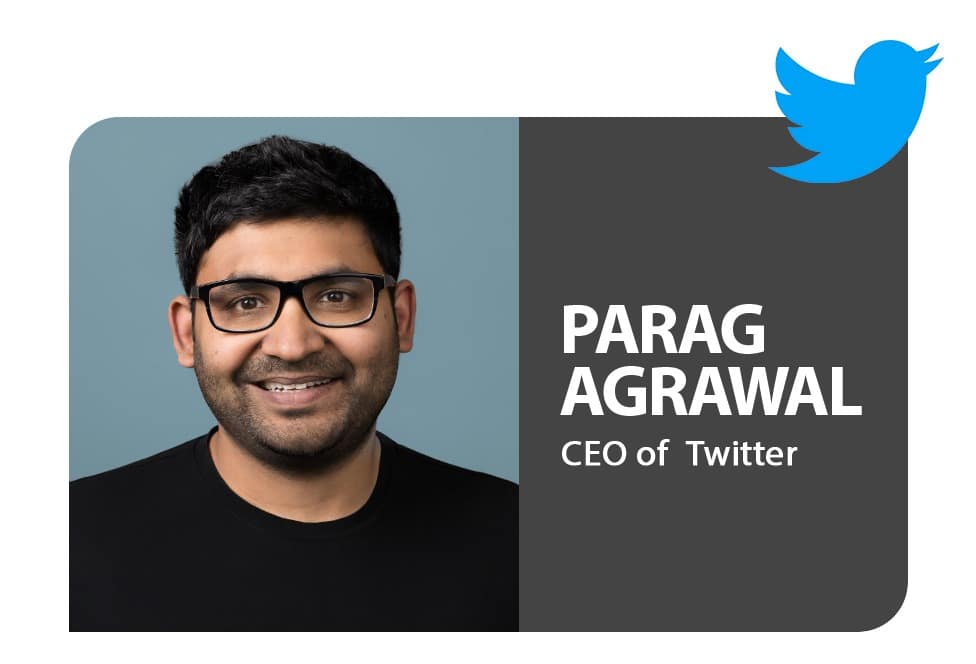 Twitter Hires New CEO, Here’s All You Need to Know About Parag Agrawal

On November 29, 2021, Twitter Co-Founder Jack Dorsey stepped down as the CEO and handed over the social media giant’s reins to Parag Agrawal, the 37-year-old former CTO. While announcing his departure, Dorsey, in a company-wide email, said, “The board ran a rigorous process considering all options and unanimously appointed Parag. He’s been my choice for some time, given how deeply he understands the company and its needs. He leads with heart and soul and is someone I learn from daily. My trust in him as our CEO is bone-deep.”

Both the announcement and appointment pushed Agrawal into the spotlight. And it soon had everyone wondering who the Indian-origin techie on the CEO block was and the accomplishments that propelled him into the most-coveted position in the industry.

Here are things about Agrawal that give you a peek into all that the youngest CEO to head an S&P 500 company is made of.

Agrawal has clocked stints with high-profile tech giants in the Valley and has extensive experience before joining Twitter in 2011. He began his career in the US with Microsoft in June 2006 and worked with the company for four months before making his way to Yahoo! where he spent a little less than a year and a half. Subsequently, he jumped on the Microsoft Corporation bandwagon, followed by a switch to AT&T Labs Inc. before joining Twitter as a product engineer.

Agrawal started working for the social media company as a product engineer in 2011 and made his way up the ranks to take on the CTO position in October 2017. This growth, which took less than six years, saw Agrawal spearheading the company’s technical team for another four years and three months before Dorsey made way for his appointment as CEO. In this period, Agrawal oversaw Bluesky – Twitter’s project to establish a decentralized protocol for social media, which didn’t raise the roof until January this year. He also actively fronted Twitter’s brand-new crypto team.

3. His Involvement in Twitter’s Migration to Cloud Servers

Twitter has long been affected by slow performance and difficulty in introducing new features. This is because it operated all of its services on its own servers. In a 2020 interview with The Information, Agrawal compared Twitter’s tech to a “ball of hair” – a phrase he picked from the platform lead at the company, Nick Tornow. The then CTO led the migration of cold data storage and Hadoop clusters to Google Cloud in 2018. In less than two years, Amazon Web Services revealed it would be hosting Twitter’s timeline feature.

4. His Commitment to Combating Misinformation

The new CEO has quite a lot to do on this front. And Agrawal has shown his commitment to doing that. These include several initiatives that Twitter took during his time as CTO, including putting to work an ethical machine learning initiative and efforts towards content moderation.

In an interview with MIT Technology Review, Agrawal addressed how to strike a balance between protecting free speech and combating misinformation on the platform. He commented, “Our role is not to be bound by the First Amendment, but to offer a healthy public conversation. And our moves are reflective of things that we believe lead to a healthier public conversation.” He further added, “Twitter’s role in this is not to decide what’s true and what’s not – and to restrict content or block users – but rather to decide which part of the content on the internet is brought to the attention of users in the service of a healthy public debate.”

Agrawal’s decade of work at Twitter has been nothing short of impactful. Now that he has taken over the top position, the world will be watching how he handles the challenges Dorsey has managed since co-founding the company. One thing we know, Agrawal’s dedication towards achieving the goal of decentralized social media is sure to hit the headlines.

Instagram Starts Testing Subscriptions: What This Means for Creators

The Badge That Matters: How Social Media Verification is Gaining Momentum